Ready for my close up

I'm proud to announce my first celebrity quilter interview. Yes, I did mean to link to gameinformer.com.

Big thanks to Annette Gonzalez and Andrew Reiner at Game Informer. Annette's regular The[Crafty]Gamer series is a great source of fun and nerdy inspiration. Check it out.
at 2:20 PM 3 comments: 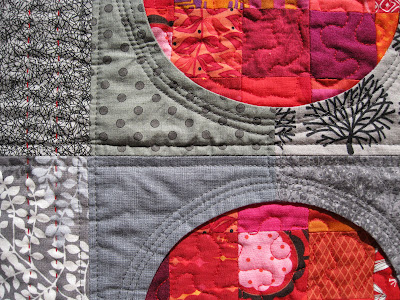 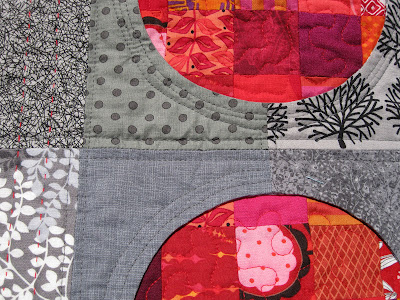 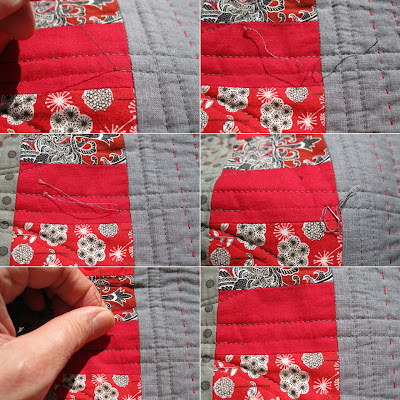 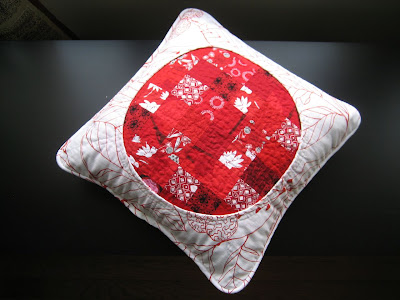 I sewed a pillow for my friend Thuy for her birthday. It's not quite her birthday yet, but today was the best chance for my son to giver her the birthday present. She loves red, and I've been feeling renewed interest in the porthole technique. The pillow is 16x16 (maybe a bit smaller--the pillow form fits in very snugly). with a foliage print base and a circle patchwork of reds in floral, solid and geometric patterns. 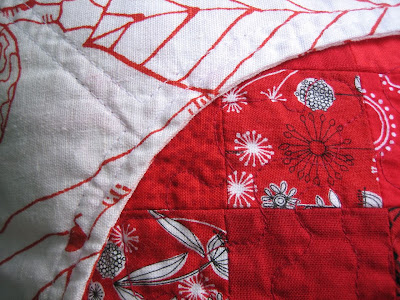 The finished size of the red squares is 1 1/2", and the porthole diameter is about 10". I love the square patchwork circumscribed by the foreground porthole. More portholes to come in the near future.
at 8:30 PM 10 comments: 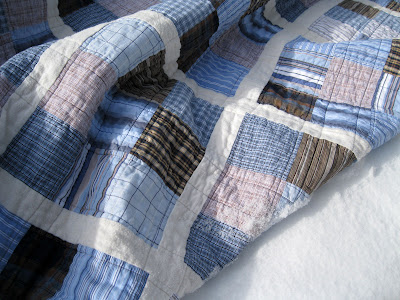 In honor of Peter's men's shirt sew-along, here are some photos of the recently finished shirting quilt. It's a basic nine patch pattern with ivory flannel sashing between the blocks. There are 12 shirting fabrics in brown and blue. Most were upcycled from men's shirts and a few fabrics came from Happy Stop in Oakland, where the hit-or-miss inventory is $2 per yard. 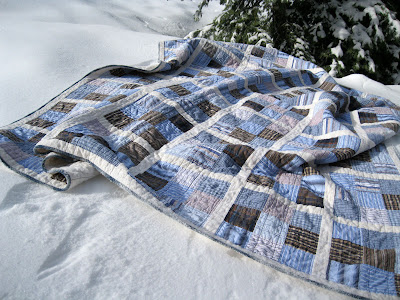 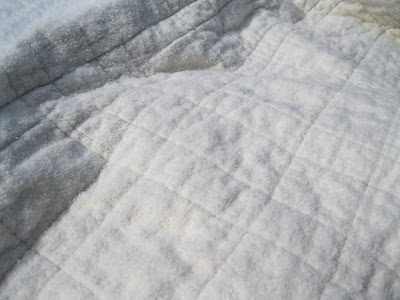 It's backed with a double layer of flannel. The quilting is a wide-spaced plaid in tan and navy. 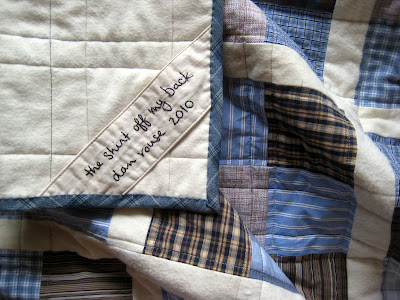 I posted the hand embroidered label before, back when I had just started to finish the binding by hand. After letting it languish for a few weeks I decided to machine-stitch the binding, which ended up being something of a disaster. My plan was to stitch in the ditch on the front of the binding (that is, run the thread along the edge of the binding so that it is almost invisible), catching the edge of the plaid fabric on the back. Perhaps because of the fluffy double layer of flannel backing, I had the hardest time catching the binding on the back and had to sew over most of the edge two and three times. The short cut turned out to be a lot more work than I had bargained for. Thankfully this quilt was never about precision and detail.
at 11:09 AM 15 comments: 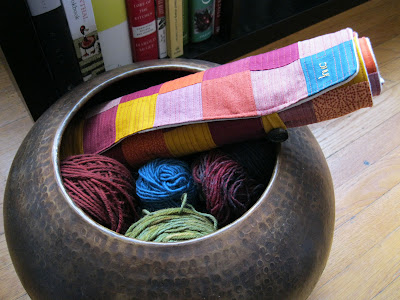 . It's a needle case with a quilted patchwork cover and linen pockets inside to sort and hold knitting needles. The book has some lovely ideas and helpful techniques (machine piecing hexagons!), and I was happy to see some crafty projects in the mix. 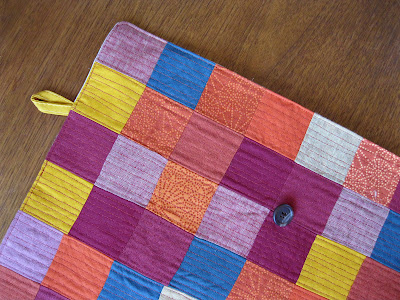 The patchwork is made up of linen and cotton scraps from recent projects.  I followed Malka's lead and quilted with close parallel lines in red thread. The case rolls and fastens with two button loops. 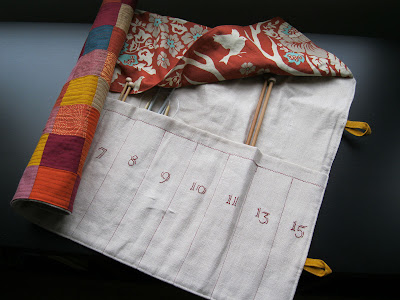 The project in the book features rubber ink stamps for the pocket labels. I decided to go with some hand stitching. 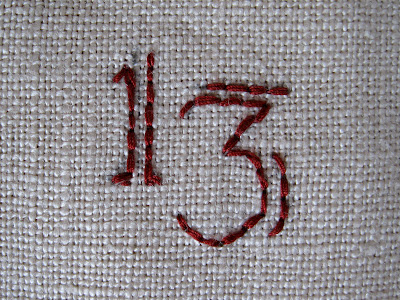 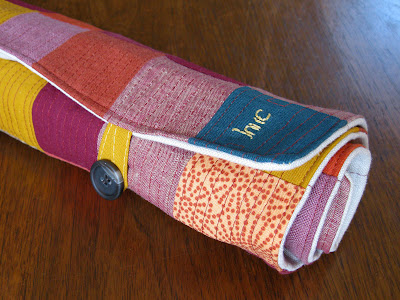 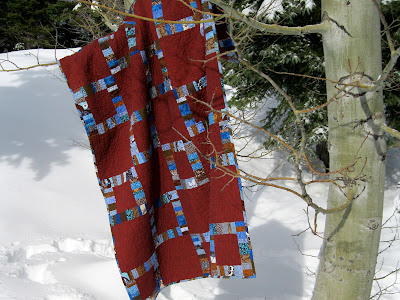 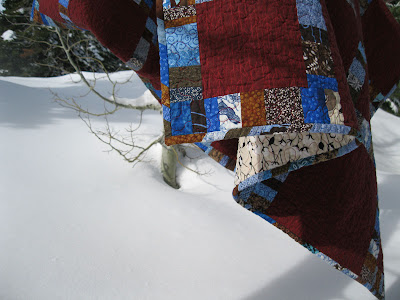 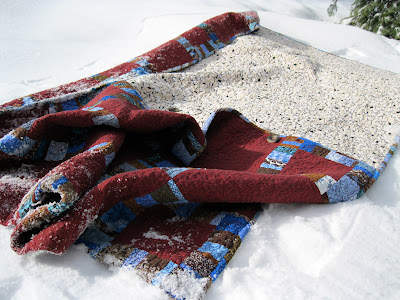 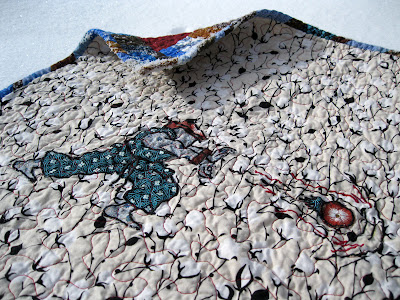 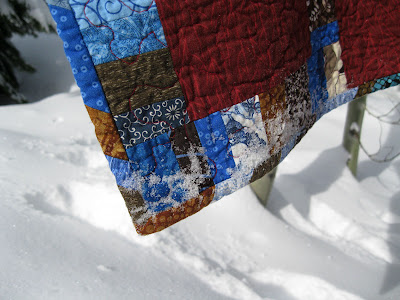 I'm really pleased with the almost-solid red background fabric against the blue and brown strips. And I'm still crazy about the pieced bias binding.
at 9:12 AM 4 comments:

Happy New Year everyone! I've just spent a week in the mountains with my extended family, and we all had a wonderful holiday. I brought a couple quilts that I've had a hard time photographing in the hope that a snow scene would be more flattering. I show them soon, but for now here is a final handmade Christmas gift. 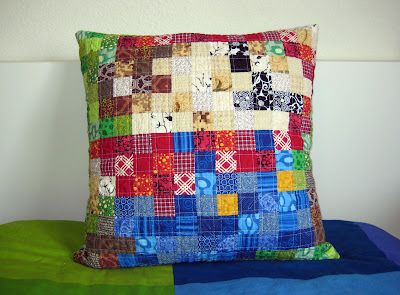 It's the finished Mario pillow I made for my nephew. Mario is much less obvious than he would be had I used solids, but I like the way he disappears when you get too close. I quilted straight lines on both sides of each seam. 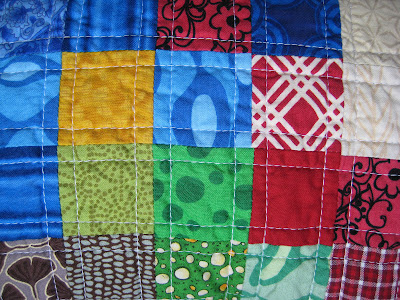 I assembled the top by chain-piecing progressively larger patches of the pillow top. 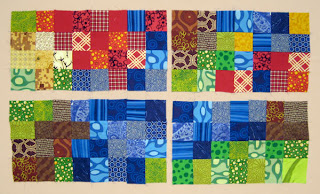 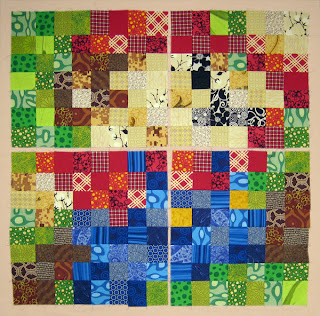 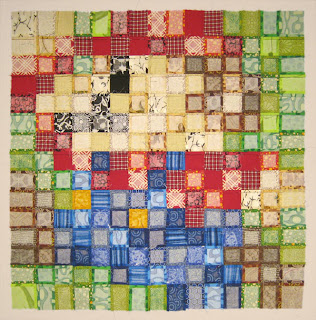 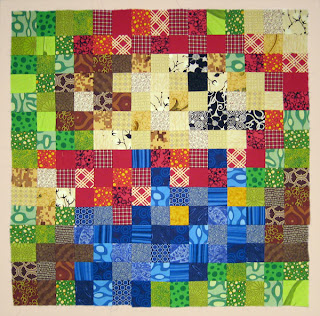 Next time I do a project like this I'll probably be a bit more careful with consistent color value in the various color blocks. Or maybe not!
at 11:10 AM 1 comment: