I've finished my entry for the Project Modern monochrome challenge, save a few stitches along the binding and maybe a label.  I'll have pictures for you in a couple weeks.

Next up: unicorns, beasts & botanicals. 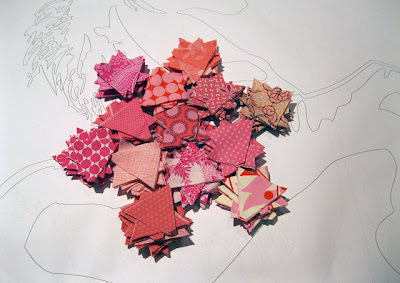 13 pink prints x 50 triangles per print = 650 pieces of unicorn
When I showed Hamish my sketches for several quilt designs he noted that my unicorn was 'going non-ironic.' I'm still trying to wrap my head around how a pink pieced unicorn quilt made by a 42-year-old man can escape irony. But maybe he has a point.
at 12:28 PM 4 comments:

... has nothing to do with quilting. 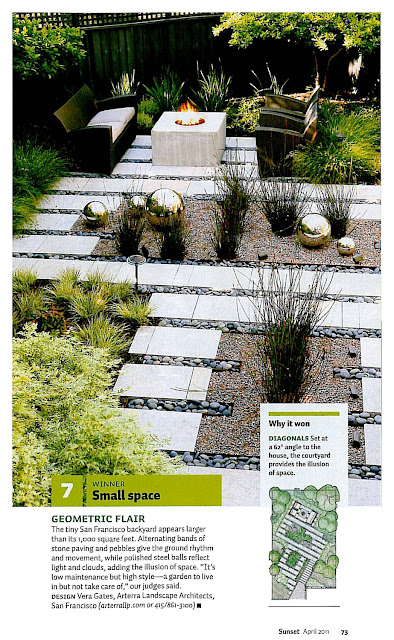 In my day job I design gardens. One garden I did a lot of work on a couple years ago -- from initial concept to design details and planting -- is featured in the April edition of Sunset magazine, including my hand-drawn plan rendering. I'm really proud of this garden and it's great to see the photo published. It's a tiny garden in an upscale San Francisco neighborhood. Pacific Heights is a cool and foggy space, so it was important that the landscape could be enjoyed when viewing from the three floors of the house above, as much as from within the garden itself.

The  diagonal geometry and strip paving create a sense of depth in the small space, and the architectural plantings reinforce the clean modern feeling of the garden. The design and plantings were all completely new, except for the little saucer magnolia trees in the corners and the diagonal staircase coming off the small terrace above. I worked closely with Vera Gates, one of the owners of Arterra Landscape Architects.
at 1:24 PM 11 comments:

Last weekend we made a quick trip to NYC to visit Hamish. I'm so bad at taking pictures, but here's Malcolm's photo essay from Purl Soho. Did I even know he had the camera? 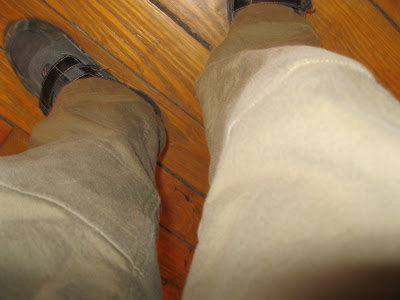 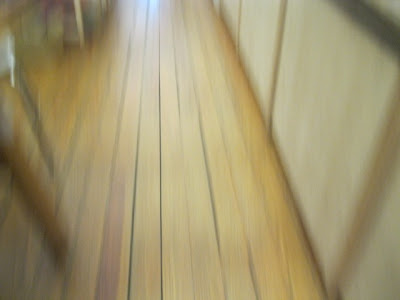 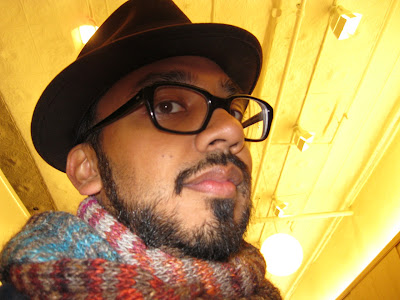 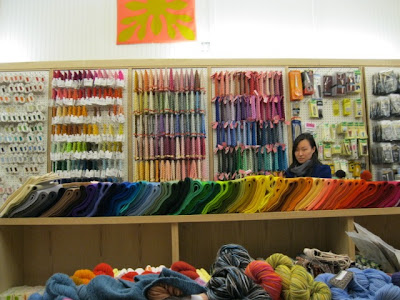 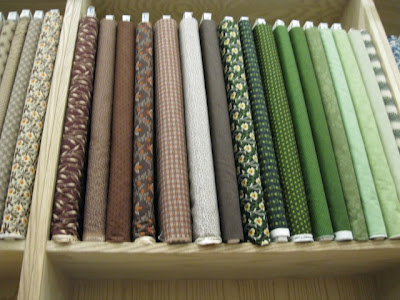 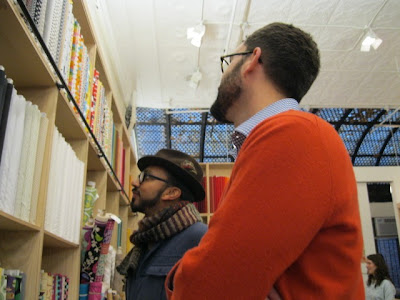 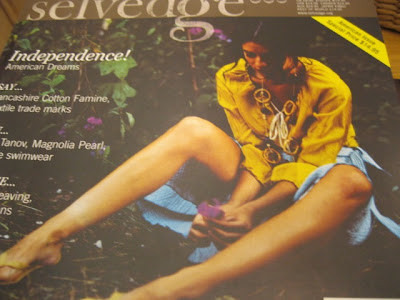 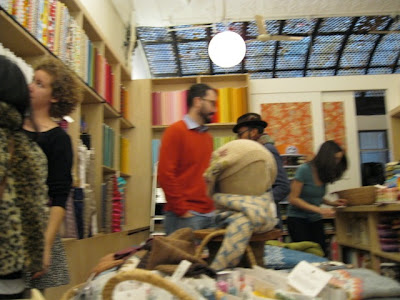 And the portrait of the artist: 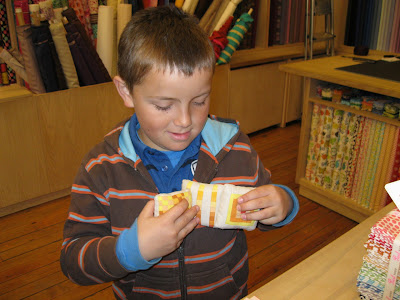 The circle quilt, I'm happy to say, is done! The finished size is 92"x 92". I'll be carrying it to Hamish in New York at the end of the week. 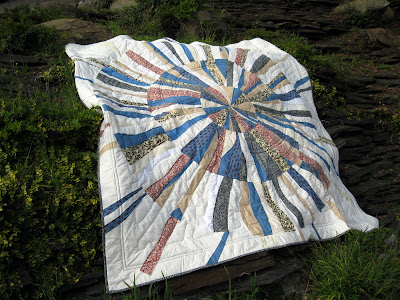 I quilted from both sides. I started on the medallion side with a navy blue echo stitching parallel to the sashing seams. 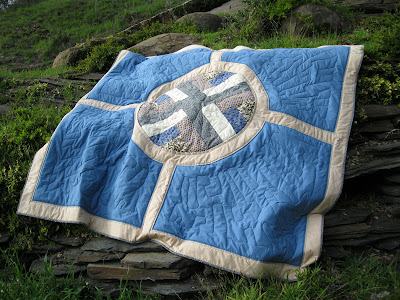 Then I flipped it over and used the rays as my guide for some free motion meandering. I was aiming for about 3" stitch spacing with natural thread. 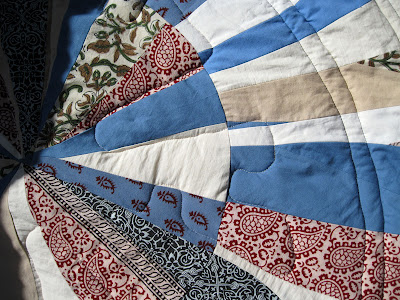 The starburst is intentionally a bit off center, highlighted by the navy echo quilting. 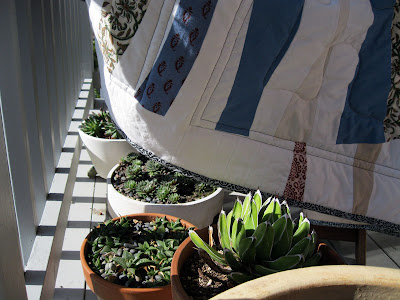 The wide quilting distance and the high loft batting (a layer of cotton/poly plus a layer of wool) make this blanket feel like I comforter. I slept under it the other night, and I can certify that it's at least as warm as my two Warm&Natural-batted quilts (one of which has a double layer of cotton flannel for backing). 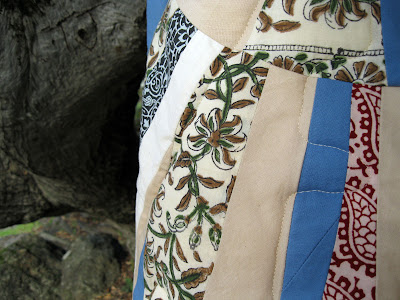 I love that this quilt feels like it has two fronts. I refuse to call the starburst side the back -- it took me so darn long to piece! 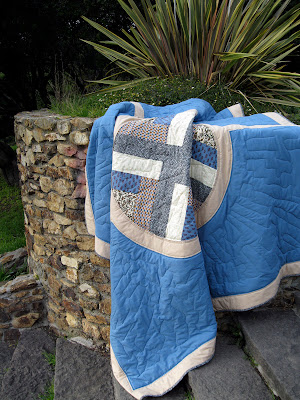 And the medallion side benefits greatly from the quilting in the blue patches. It's amazing what a little thread and pucker can do for a solid field of fabric.
at 8:05 AM 14 comments: 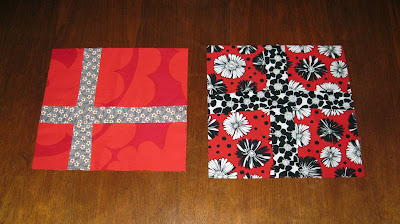 Here are my two blocks. I remember seeing Jenny's inspiration -- a quilt by Lucia at Lulubloom -- last summer, and loving how it all came together. As of yesterday Jenny was still accepting blocks for her project. And I'm sure the three organizations listed above will be happy to accept your cash donation any time!
at 12:25 PM 1 comment:

Wow! I'm honored to have my hexagon wedding quilt featured on Quilt Story. Thanks Heather + Megan!

I've made some progress on Hamish's wood block quilt. It's been slow going because I spent most of the weekend curl-up-in-bed sick and my strength isn't back yet. But now I'm moving again, so without further ado here are the areas of progress:

First, I finished the starburst patchwork on the back by adding a fourth ring (the largest pieced circle ever) and four more arcs to fill in the corners of the square.

For batting, I decided to use the Quilter's Dream Wool and the Hobbs 80/20. I also bought the Hobbs Thermore synthetic batting, but I just didn't like the way it felt for this quilt, especially with the wool. 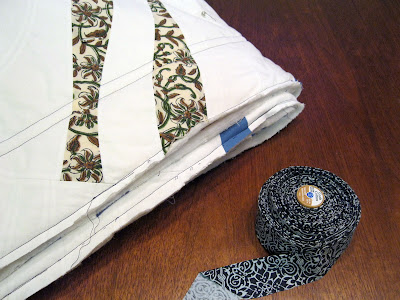 Next, I started quilting. Boy is this a tough one to quilt. In the best circumstances it's tricky to quilt a queen-sized blanket on my little machine. But the high-loft wool plus another batting layer creates some substantial bulk. It's hard just to move the thing around, especially rolled up under the machine arm. And it's hard to machine-quilt high-loft blankets without getting fabric puckers on the backing. You can see the sloppy remains of many ripped quilting lines along the edge of the blanket in the picture above.

Finally, needing a break from the quilting wrestling match, I made the binding tape. I had purchased a different print for the binding, but it just wasn't right. I thought it would go with the woodblock prints in color and style, but in the end it failed on both accounts. So I went with the darkest blue print that forms the heart of the medallion on the front of the quilt. It's going to look great.
at 7:10 AM 4 comments: