I finished piecing a new quilt top today.  The edges are a little raggedy. I plan to square it up after I quilt it, but for now it's about 80"x100". 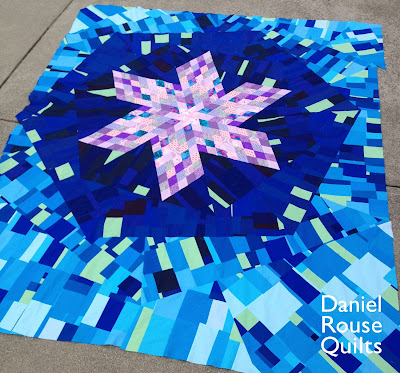 I didn't have a plan at the start. I knew I wanted to do something with lavender diamonds. I started with the central star, piecing 2 1/2 inch strips. 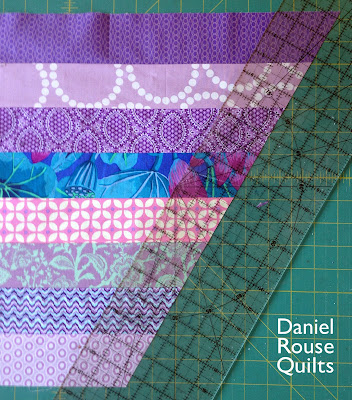 Then I cut 2-1/2-inch diamond strips at a 60-degree angle. To address some waviness in the strip piecing, I aligned my ruler's 60-degree line with the center seam, and trued up the angle after every two diamond strips. 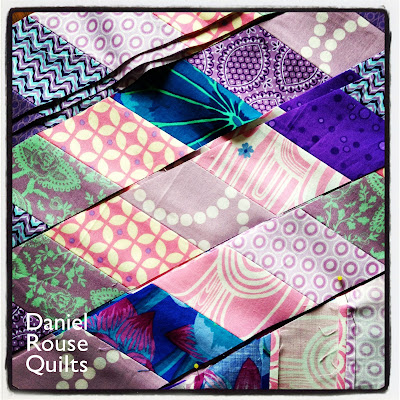 The colors are mostly pink and lavender. For punch I included some purple, magenta, blue and green. 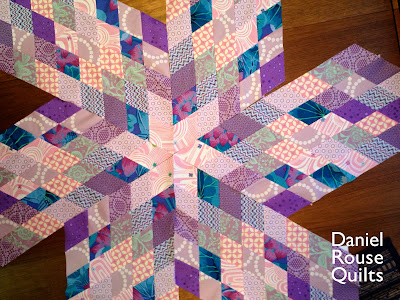 I bordred the star with an improvised patchwork of dark blue solids highlighted with a pale green that picks up the green in the Tula Pink paisley and Kaffe Fassett water lily prints. 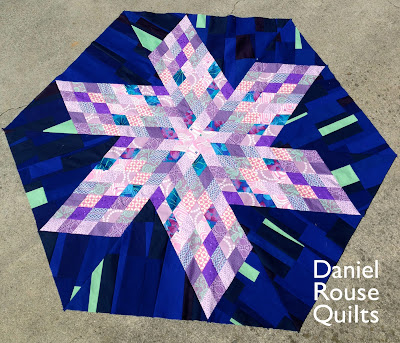 Next came a rotated hexagon in slightly lighter blues. 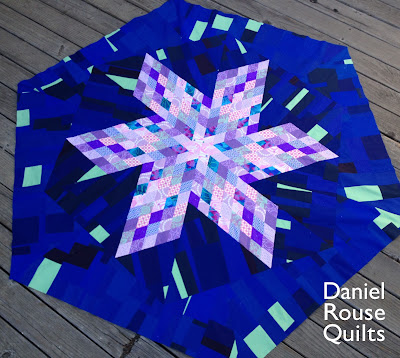 It's hard to see here, but there are at least a dozen blue solids in the first two borders. Some are very similar, but next to each other there is just enough contrast to create a sparkle effect, I hope. Then came two more rotated borders with another 10 solid shades, shown in the top photo.

The grain of the border solids was crucial in my vision of creating a sense of movement and rotation. For each facet in the second, third and fourth borders, the grain is perpendicular to the outer edge (the first border is a bit more complex).

As it happened my first try at the third border was a complete loss. I created a large piece of improvised patchwork fabric, then cut the facets, all of them, at the wrong angle. It cost me a full day of work, but worse two months passed before I could pick the project up again.

I did pick it up again last week and got the border right. I have to tell you it bugs me a little that there isn't greater contrast between the third and fourth border. Or maybe the contrast is too great between the second and third. I hope to be able to make some sense of it in the quilting.
at 6:38 PM 27 comments: