This weekend I finished two quilt backs. I find piecing backs to be very liberating. I usually approach quilt tops by planning every detail first, even before I think of specific fabrics. It's on the backs that I start sewing with only a broad idea of the finished project and see where my hands take me. Although both of these tops finished with a precise look and geometry, I planned only one step at a time. For both I started by piecing scraps from the respective quilt tops, cutting and recutting as I pieced, then forming the whole around those upcycled blocks. The first is for Hero, the unicorn. 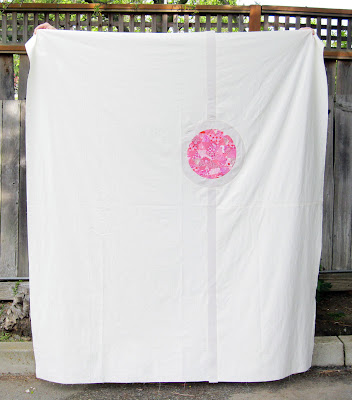 I patched together triangle trimmings from the quilt top and pieced them into a single 12-inch circle. 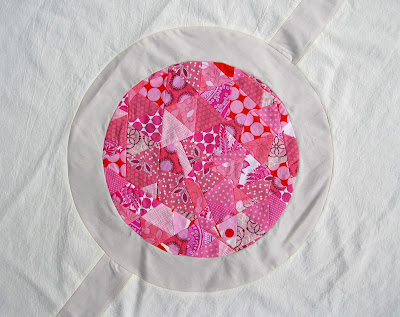 The back is Kaufman Kona Crush in Ivory. It has a wonderful crinkled texture that feels and looks great. It doesn't seem like it's very widely carried, but my local quilt shop sells it in several colors. I had better luck working with the Crush fabric when I pinned liberally. The crinkled texture results in easy stretching, especially working with these long blocks of it. (I really don't like pinning, but I find I hate ripping seams even more.) The sashing is Kona solid Ivory, and continues the tone-on-tone theme from the quilt top.

The other back is for Hero's arch enemy. I know we're not supposed to keep secrets here, but I've been working on Hero and his nemesis at the same time. I think maybe there was just so much yin in all those magical cream pinwheels and pink unicorns that I needed to stir up some yang to keep the project going. The bad boy is orange in a field of blue, and I'll have photos soon. Anyway, the quilt back uses trimmings and scraps from the quilt top as well. 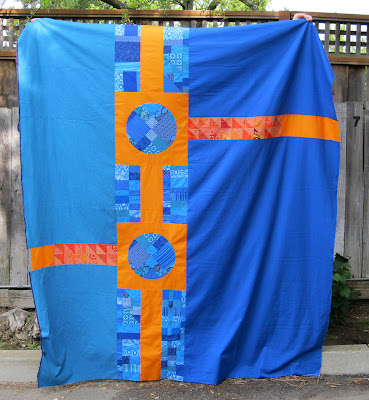 Although it ended up being quite a bit more involved than I originally bargained for, I'm happy with the result. Here the solids are Kona Royal and Orange, and Kaufman Carolina Chambray in Pacific
at 12:28 PM