The title for the quilt I finished for my guild's Stitch Modern show this month is a mouthful: Measuring Stars With a Calculator and a Ruler. The name is a reference to a song by Au Revoir Simone. I must have been in a romantic mood. 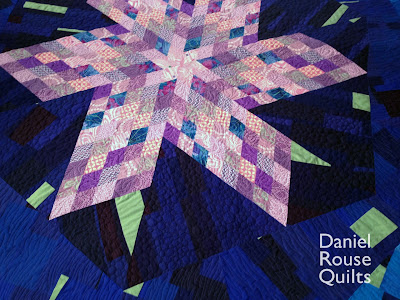 I started this quilt without a plan, making the 60-degree diamonds from a variety of mostly pink and lavender prints, then experimenting with several arrangements. The six pointed star was my favorite. 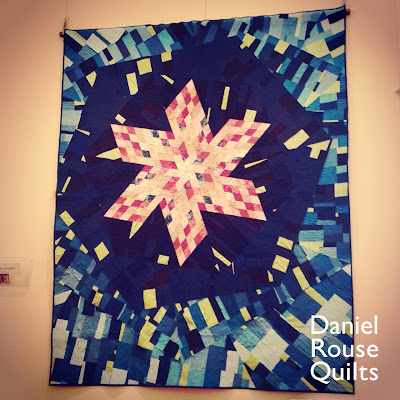 In contrast to the regularity of the diamonds, the star is set in a series of improvisationally pieced wedges that form hexagon rings around the star. 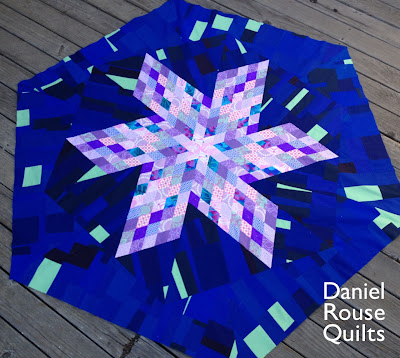 To highlight the pinwheel movement of the asymmetric star, I rotated each successive hexagon ring by 10 degrees, always keeping the dominant grain of the improvised piecing perpendicular to the outer edge of the hexagon. One of my biggest errors in making this quilt happened when I cut the wedges for the second or third ring with the grain in the wrong direction. After that, I set the quilt aside for weeks until I was ready to recreate the pieced fabric. 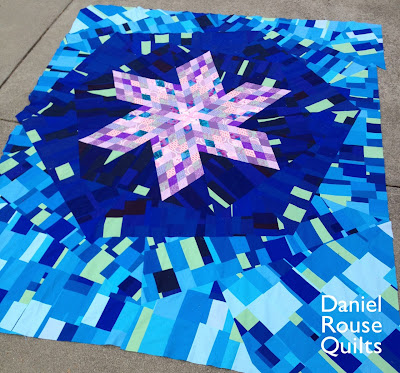 I was inspired to use the green bits by the light green tones in a couple of the diamond prints. I used approximately 20 different blue solids, adding lighter solids as the rings got larger. The star is set of center, also to reinforce the sense of movement. 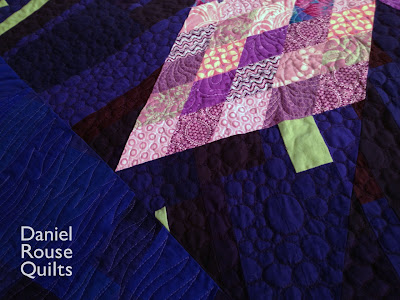 I used three pasterns for quilting. On the central star I used an Angela Walters inspired paisley swirl in white thread. For the inermost hexagon I pebbled in midnight blue thread, leaving the green flecks unquilted. The outer hexagons are quilted in a back-and-forth curve in various shades of blue. I must confess that quilting took a long time, as more than once my quilting caught ugly puckers on the back, and the quilt sat again for weeks waiting for me to motivate myself to unpick large sections of dense quilting.

I am happy with how the quilting turned out, especially in the bit in the above photo where the three quilting patterns come together.

I'll have some more photos and descriptions soon detailing how I constructed the diamond star and the blue fields.
at 10:37 AM