Hero's nemesis; or, the orange lizard 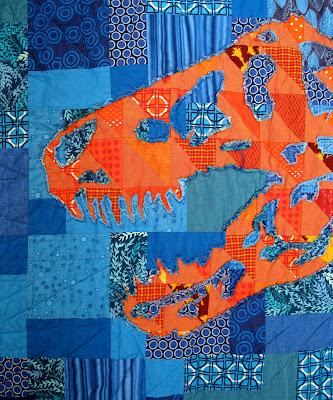 If a had to choose a favorite among my three stencil quilts, it would be this one. I love everything about it, starting with orange and blue (the colors of the California poppies and blue lupine blooming all over the hills right now.) The background is a disappearing nine-patch of royal blue and deep turquoise prints and solids. The stencil is a grid of half-square triangles in orange shot cotton and prints. 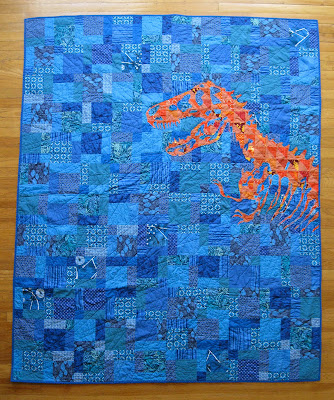 I'm also pleased  with the sense of menace and movement created by the dinosaur entering the frame from the side. 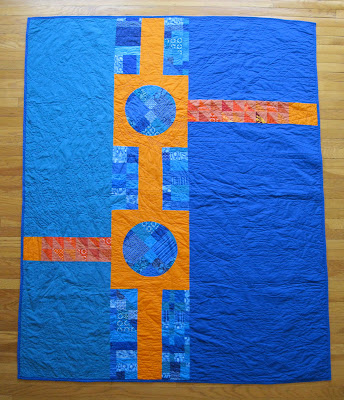 The back is also pieced in orange and blue collected from trimmings and extras from the front. Once again, The quilting along the stencil outlines has a surprising impact on the back.
The stencil design was inspired by a piece of clip art I saw on SLOG (the blog of Seattle's Stranger newsweekly). My favorite things on SLOG are the Savage Love letter of the day and Mary Traverse's regular Dinosaur News updates, in addition to lots of other delightful nuggets. Mary was kind enough to send me the full image of the articulated skeleton. Thanks Mary! And thank goodness the Stranger has its priorities straight and put her on the dinosaur beat.
I quilted the blanket with concentric zig-zags emanating from the T. rex's gaping maw. It was as close as I could get to a menacing roar without spelling it out. 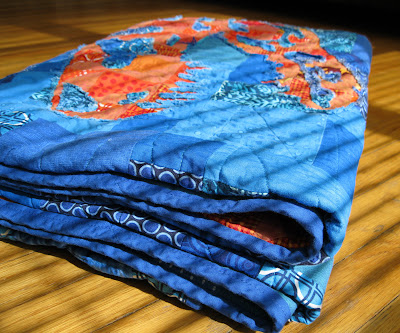 My nine-year-old wants a dinosaur quilt, but he insists on a red one. So the orange lizard is now available on Etsy.
at 8:19 AM